Democratizing Impact: This is why Stardust is feeling reflective in its 6th year 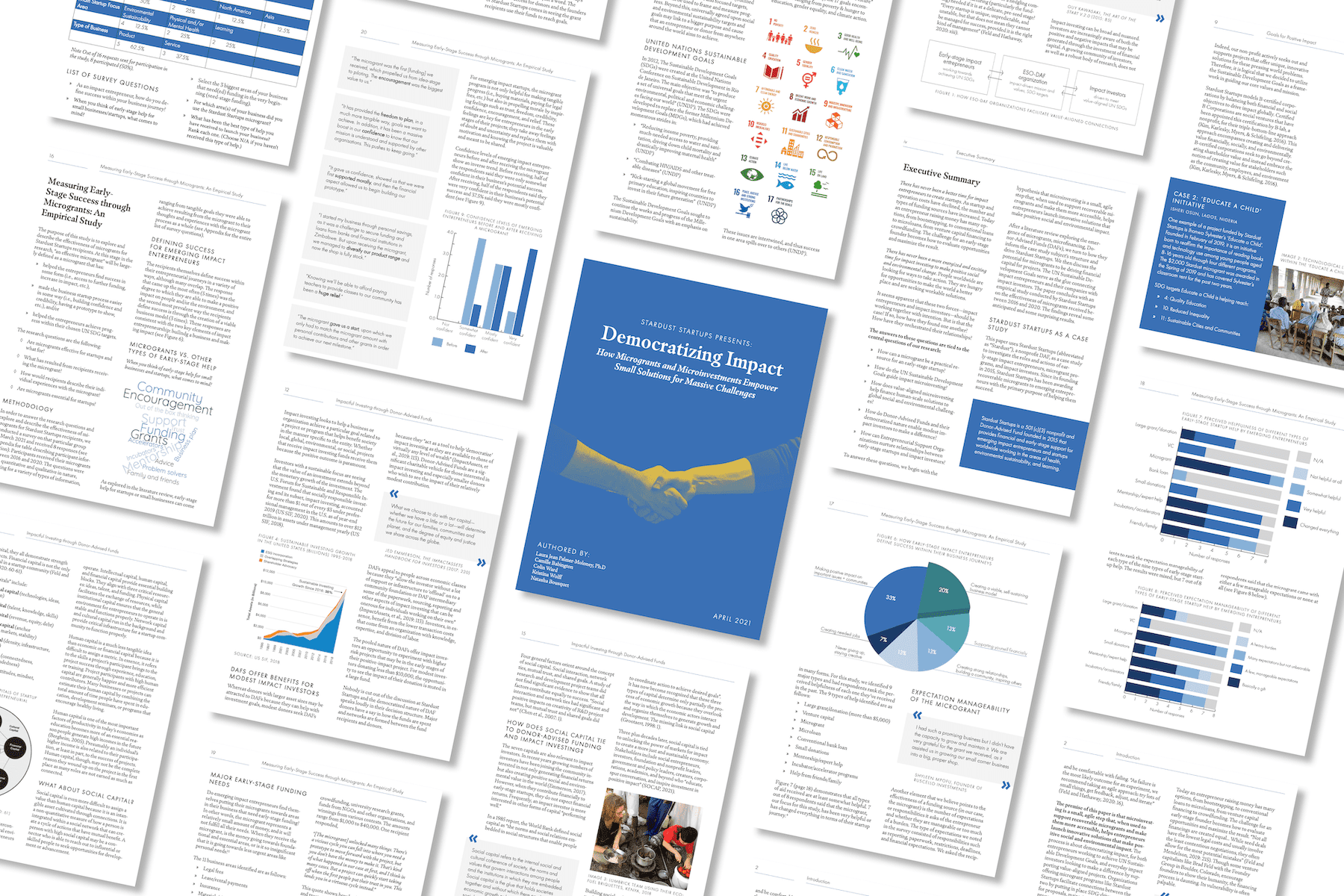 Stardust Startups turns six this year. Maybe it seems strange to picture a project as maturing, but it hasn’t just grown in size.

Born from an intuitive fire that transformed grief into purpose, the project is now practically a child at this point. Out of the terrible toddler phase, anyway.

And if it were a child, maybe, she would be gearing up to harness all her newfound language and physical skills to climb on top of the playground and proclaim to the world that she is here and ready to make a ruckus.

After a year like 2020, in which Stardust continued to make a purposeful impact despite the pandemic, that’s just how we feel leading up to our annual Impact & Innovation Givenar on May 7th at 1 PM ET.

Register for the May 7th Givenar here

We’ll share a lot on May 7th, but I don’t want you to miss what I learned while working on our recent project. It is a sense that Stardust Startups is at the tip of the philanthropic spear tearing through space and making an impact far more sweeping than its size suggests.

If the last year shows us anything, it’s that what we do matters.

While the world has changed a lot since 2015, Stardust Startups’ mission remains the same: to make a positive social and environmental impact in the areas of sustainability, health, and learning by providing financial support for emerging entrepreneurs.

While we love our little 6-year old, we knew that its future depends on it being ahead of its peers. So we stepped away from our soft and fuzzy connections and donned our academic caps to ask… well, a lot, but really:

What kind of organization is Stardust Startups, and how well is it working to make an impact?

The whole Stardust Team researched, discussed, marinated in thoughts, and wrote a paper to share with the world that sought to answer these questions.

The white paper set out to investigate just what kind of an impact you are making with your contribution.

“Our research paper begins with a literature review to explore microgrants’ emergence, microfinancing, and donor-advised funds (DAFs). The focus then shifts to examine the UN Sustainable Development Goals, which serve as the glue connecting impact entrepreneurs and their companies with impact investors. The paper concludes with an empirical study conducted by Stardust Startups on the effectiveness of microgrants received between 2016 and 2020. The findings reveal some anticipated and some surprising results.”

“Democratized Impact: How Microgrants and Microinvestments Empower Small Solutions for Massive Challenges” is the paper’s title. Democratized decision-making is the primary element of DAFs that informs Stardust Startups. Still, its size lets it give a boutique service to donors by giving even the smallest of donors a connection to the impact of their donation.

Jean and Camille work alongside the donors to ensure that every project that receives funds connects to Stardust Startups’ local and global impact goals. This human touch is sometimes lost in the million-dollar philanthropic endeavors but is a cornerstone to Stardust.

“Microinvestments” is a new word that tries to define the point at which Stardust Startups is at the nexus between Philanthropy and Impact Investing. The fact of the matter is that the projects and entrepreneurs who receive funds often return it once they have the resources but remain part of a network that builds the social and human capital.

We found in our discussions around writing the white paper that Stardust Startups is not a typical DAF. Nor is your donation just to another charity just tossing money at projects for the sake of any impact and flying around in first-class. So Stardust can’t appropriate these terms and think that they will match the model.

Even our “donors” are not so much donating as much as investing in sustainable projects and businesses and reaping benefits by becoming part of a network of philanthropists and entrepreneurs.

So, if you are passionate about building a world that values purpose over profit, then I invite you to be a part of our community connecting philanthropists with projects.

If academic jargon is your speed, and then check out our new white paper, Democratizing Impact. It is a collaborative paper written by the whole Stardust Team. We answer many of the founding questions upon which Stardust Startups began and see how its donations impart a local and global purpose.

If you’re already with us, then we’d love it if you can make it known. Share your support in your circle or on social media why you support Stardust Startups.

RSVP to the May 7th Givenar on Facebook HERE